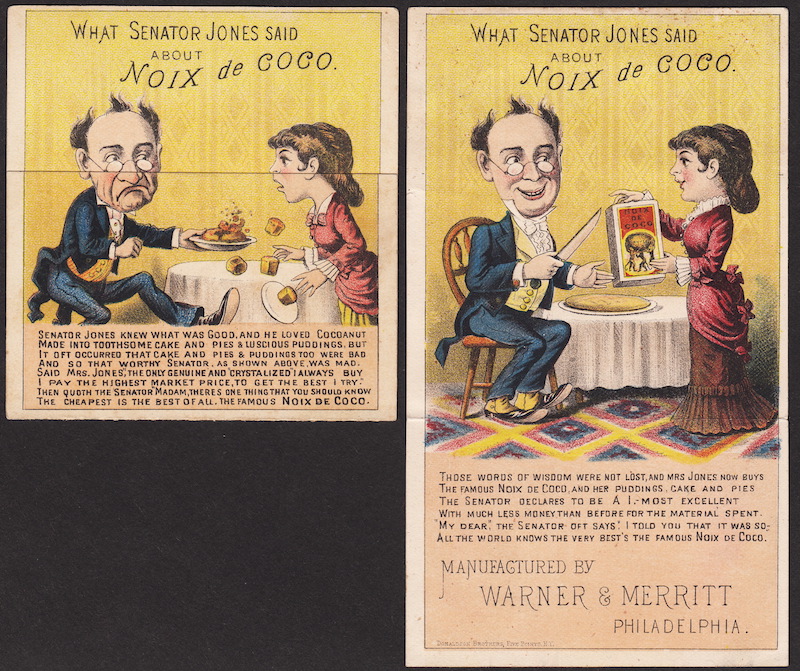 Everybody likes a good story.

Especially the kind of tale that delivers a happy ending.

Advertisers know this, so their most effective ads often tell the story of a good experience, a difficult life that is upgraded and improved through the purchase of a specific product and brand.

During the 19th Century, it was hard to get any more dramatic and obvious in storytelling about improvements in a consumer’s life than can be found in what collectors now refer to as: “The Before and After Trade Card.”

For the story of cards telling tales of consumer breakthroughs and transformations –and for an illustrated review of many classic examples of these ads– the best resource is Ben Crane’s 1995 book:

The Before and After Trade Card. 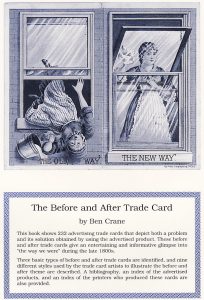 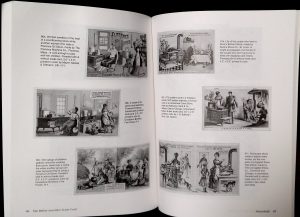 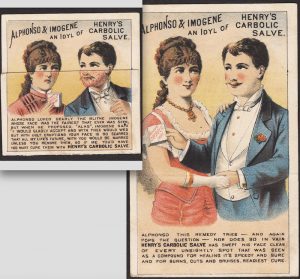 Numerous other types of  “problem solved” cards are shown as well.

With and Without cards, Paneled (and unpaneled) cards, Moving and Mechanical cards, Upside-Down cards (ambigrams), and even Before, During and After cards showing a progression of changes are all illustrated and discussed in Ben’s book.

Some of the transformations illustrated in these cards seem odd by today’s standards.

For example, in Victorian times, being “large” was often a sign of prosperity and good eating.

Philadelphia’s Mercantile Hotel catered to 1876 Centennial guests, but they also stayed around long enough after the exposition to develop a regular local clientele who could buy “First Class Meals” for 25 cents.  To suggest the quality and quantity of their meals, they issued a card showing a very thin man growing fat on their fare in a single month.

Before and After cards offer some of the most fascinating views of Victorian life and fantasies imaginable.  No wonder these clever and promising 19th Century ads were so popular in their day.

And no wonder they remain so popular yet today.

Ben Crane was a founding member of the Trade Card Collectors Association, and he contributed an outstanding overview article to the TCCA’s very first journal, ATCQ, Spring, 1994.

A reprint of Ben’s article can be found via the above link.

For more about Ben, and to tap into the wonderful resources of his huge website, click on:

More examples and discussions of the 19th Century Before and After Trade Card will be shared in future Victorian Card Hub blogs, but the link to Ben’s ATCQ article will provide researchers and collectors a very good introduction to these types and styles of storytelling cards.

Again, Ben’s article can be found in the Victorian Card Hub archive.

Visit:     The Victorian Before and After Trade Card

And, as always, all the BEST to you…  Good Collecting! — Dave Cheadle