Whether cranked out in a frontier town by the dozen, or printed by the hundreds of thousands

on a 12-ink press line in a distant major city, Victorians loved to collect advertising cards.

In fact, some 19th Century collectors, young and old alike, were so aggressive in their collecting,

that they were described at times as down-right “fiendish” in their enthusiasms.

So it is not surprising that a few cards were printed… about cards being printed. 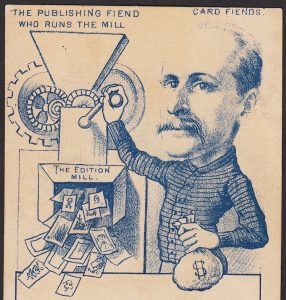 Just like today, some of the collectors back then were curious about how their cards were made.

And because a picture is worth a thousand words, let’s see it.