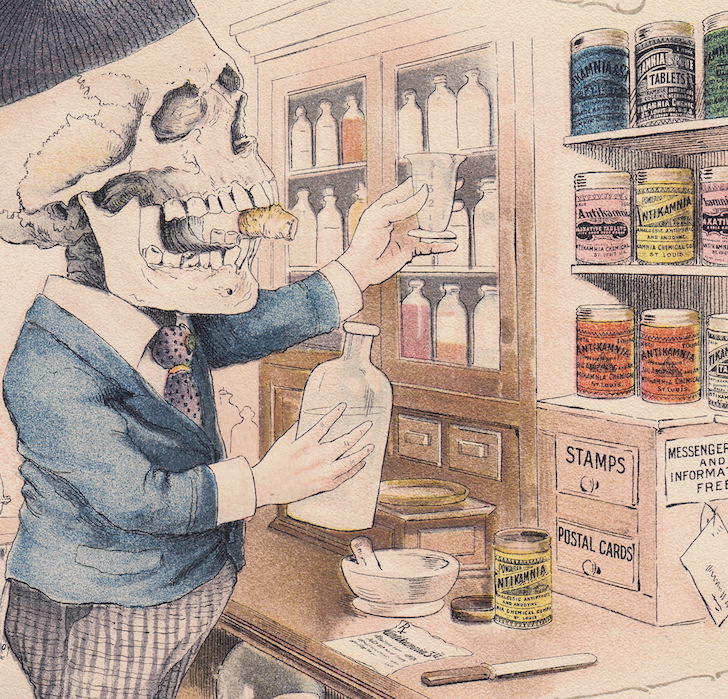 Growing up on a farm in rural western Michigan, I used to go around digging bottles from old country dumps.

With a little scrubbing, those “dump” bottles sparkled up pretty nice, and I started seriously collecting medicine bottles for the shelves and window sills around our 1800’s farm house.

There were six of us kids living under one roof, and eventually my little brother and youngest sister started coming along to assist with a shovel, and then to help with the washing when we got home (for a nickle per bottle).  Even my dad got pulled in, and after a hard day he’d sometimes join in a local dig.

Mom, not so much.  But she liked them in the window just fine.

As my collection grew, I started selling duplicates at flea markets… then setting up sales tables at antique shows and bottle swaps around the Midwest.

From antique bottles, I transitioned into collecting patent medicine advertising of the sort featured at the top of this blog post.  I found the added information on these ads to be very helpful when I was giving a sales pitch and trying to make a bottle sale.

And then I started really falling in love with the cards, signs and almanacs themselves.

From Glass to Paper

Over time, my collection of 19th century patent medicine advertising items expanded into other areas such as pre-prohibition beer and whiskey cards, soap ads, and agricultural farm equipment folders.

By the time I was teaching high school History and English in my 20’s, I was collecting Victorian lithographed cards of everything from men’s top hats to State Fair horse races.

In the 1980’s I began selling illustrated articles to magazines like Bottles & Extras and Sports Collectors Digest.  I would specifically look for Victorian Advertising Trade Cards to illustrate the specific themes I was researching and writing about, feeling like I could justify buying whatever I needed for the sake of “historical preservation” … and I rationalized that my published documentation of these artifacts would serve as a valuable legacy to future generations.

This sounded pretty convincing to me, but my wife didn’t always see it that way 😉

By the 1990’s when the trade card collecting hobby was really taking off, I had published dozens of articles in everything from Victorian Decorating and Lifestyle to a cowboy history magazine.

That’s when Russ Mascieri reached out to me to join him in launching a new collectors’ association for card folks.  Russ was the proprietor of the hugely successful Victorian Images trade card auctions, and he figured together we could put out a journal to serve the card collecting community.  More on that another time, but we had a good run, and we saw the hobby flourish during those years.

After the Trade Card Collectors Association closed down in 2002, I shifted my focus somewhat away from writing about cards and social history, and more towards selling my duplicates on ebay.

My kids were growing up, and I had to pay some bills.

From Paper to the Web

The bug to write again about cards, and to try to bring the card collecting community together again, motivated me to search for some sort of cost-effective way to get things rolling.

Everybody kept telling me I should write a blog.

A busy blog starts showing up on search engines, and traffic increases.  Linked to a website, this venue might get some traction.

By April 15th, we’d launched the framework for the Victorian Card HUB, and folks started signing up to subscribe to the blog and newsletter.  The new HUB website was getting hits, but far fewer subscribers than I’d hoped.

And the first newsletter experiment was still in the works, but I could not find an angle.

Suddenly, I discovered that I’d be appearing on Pawn Stars the next week.

Back in October, I’d filmed a couple episodes with Rick in Las Vegas, and in one of those shows I’d given him a chance to purchase one of my complete Antikamnia skeleton calendars.

I’ve not yet seen the episode, but it was pretty interesting to film.  I have no idea how the show will be edited, but Rick and I got around to shooting the breeze about Victorian lithographs, and about patent medicines, and a bit about Victorian culture and history.

Those are three of my running passions… and perhaps yours as well?

Hence, this story… and our first HUB newsletter and mailing!

I’m not quite as egotistical as this blog might seem from all of my rambling about myself and the show on April 23.

But I AM looking for a way to generate more steam for the HUB.

For the HUB to flourish, we need hundreds more folks to visit the site.  To bookmark the HOME page.  And to subscribe to the blog newsletters.

Lots of folks watch Pawn Stars.  Millions of them, from what I hear.  (I don’t get cable, so I have to go to a buddy’s house to watch the History Channel.)  Anyway, I’m hoping to leverage the upcoming show.  Maybe you’d be willing to help?

Please feel free to forward this email to as many folks as you think might get a kick out seeing some really cool ephemera on national television.  Tell them how you collect old cards like this, and that you’re not crazy… this stuff can actually be VALUABLE and HISTORICALLY IMPORTANT !

Brag a little… and tell them about one of your really cool cards.

Tell them that Antikamnia wasn’t the only patent medicine firm to issue skeleton cards.  Let them know there are a handful of other “creepy” cards in the genre, including this classic:

one of YOUR  favorite cards?

NOTE:  if  you or any of your interested family or friends miss the premier of the Antikamnia card episode, you can probably catch a rerun later in May.  The History Channel often runs their “new” episodes a few more times during the next 30 days after a premier.  Plus, most folks can figure out how to pull an older episode up ON DEMAND, or by using their computer.  My episode is S15, E25, the one titled:  “Highly Explosive Pawns.”

I’m the guy at some point in the episode who makes Rick feel “dated” when I show him crazy skeleton images from the chemical company’s advertising calendar pages.

Subscribing to the HUB

… and please invite others!

The above image comes from the same series as the Antikamnia skeleton calendar on Pawn Stars.

Okay.  I really appreciate you help on getting out the word.

All the BEST to you, and Good Collecting! — Dave Cheadle